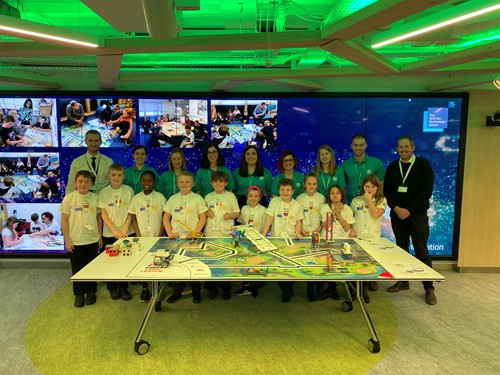 As part of the OGTC’s STEM initiative, we partnered up with Heathryburn Primary School to enter the FIRST® Lego League Tournament – they called themselves Supreme Lego League Team. This is our first time taking part in this inspiring programme that encourages young people to take an interest in real-world challenges, whilst developing new skills. If you are unfamiliar with the Lego League Challenge, you can find out more here.

The official FIRST® Lego League tournament is nearing fast… Supreme Lego League Team has been practicing harder than ever, with our dedicated volunteer coaches alongside the kids once a week to get the very best from them. Last week, the children had a chance to practice their presentation skills in our very own Innovation Hub. With an audience of industry professionals, they received some valuable feedback.

During their final session before the tournament, the team remained enthusiastic, committed and of course creative as ever. We caught up with Ana Pires de Almeida, who volunteers as a coach, as she shared what she feels the Lego League has achieved:

Discussing their wacky ideas and finding a practical application to the ideas they were developing was particularly fun. The competition is well rounded, bringing them face to face with realistic challenges you may find in industry, which really furthered their development.”

We asked the kids what the word “innovation” means to them, and what they have learned from the experience…

See their response in this video, which captures their hard-work, teamwork and inspiring accomplishment.

Good luck with the competition Supreme Lego League – you’re already winners to us!