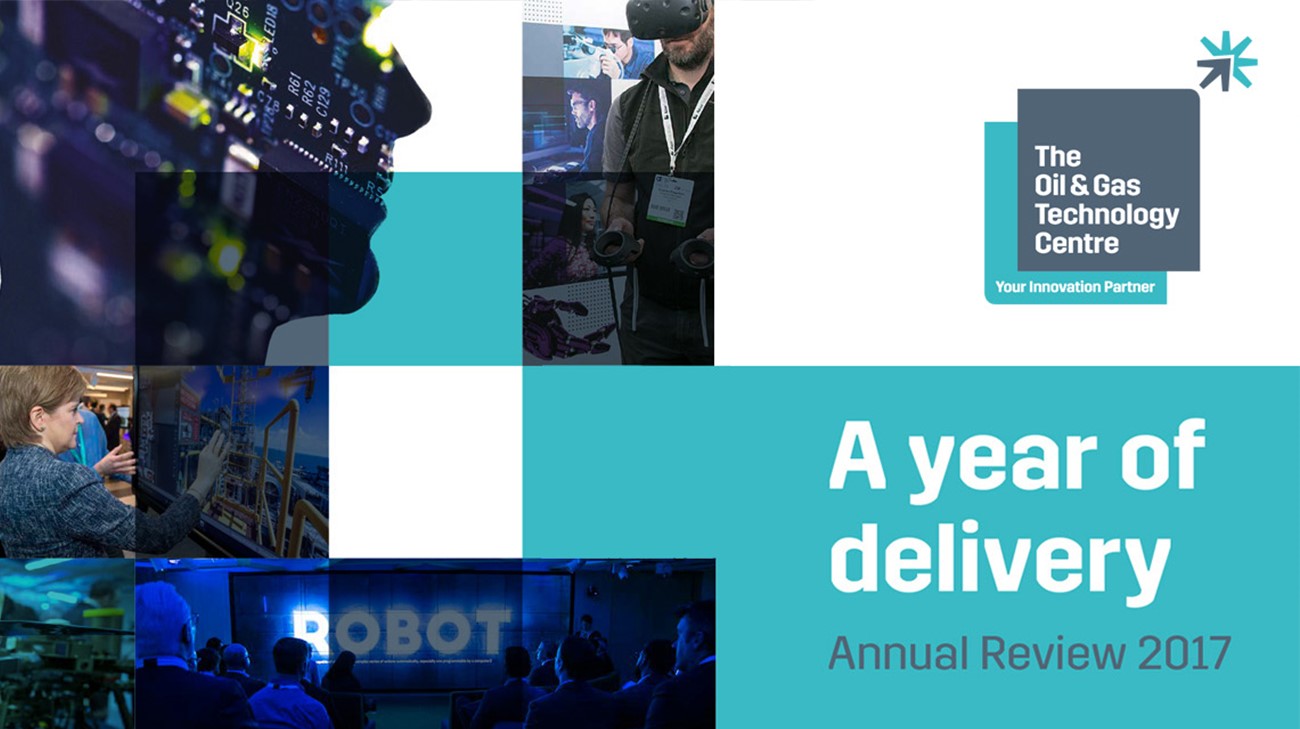 The Oil & Gas Technology Centre has published its Annual Review 2017, highlighting our progress and delivery in the 12 months since we launched last February.

During the year, we partnered with industry to co-invest £37 million in more than 70 technology projects.

The Oil & Gas Technology Centre has published its Annual Review 2017, highlighting our progress and delivery in the 12 months since we launched last February.

During the year, we partnered with industry to co-invest £37 million in more than 70 projects to develop and deploy new technology that could transform the future of the UK North Sea.

10 field trials were approved, identifying, for example, how non-intrusive inspection techniques could deliver annual savings of £244 million and a new thermite well plugging and abandonment solution could save the industry £100 million each year.

Our Calls for Ideas programme generated more than 180 new technology ideas from inside and outside the oil and gas industry, and we built strong connections across the UK innovation ecosystem.

5,000 people visited the Centre to take part in events and workshops during the year and in October 2017 we opened the Innovation Hub – a unique, collaborative space and the focal point for activities with schools, colleges and universities.

We also agreed to establish two new National Centres of Excellence in the North East of Scotland; in decommissioning in partnership with the University of Aberdeen, and in subsea engineering with Robert Gordon University.

Archie Kennedy, Chairman said: “We have achieved tangible results in our first year, identifying opportunities and creating a governance process that makes sure we fund technologies that companies want and need – and that will make a measurable difference.”

Colette Cohen, Chief Executive Officer said: “We’ve made a positive start but there’s so much more to do. We look forward to continuing to work with our partners to help unlock the full potential of the UK North Sea, anchor the supply chain in North-East Scotland and create a culture of innovation in the region.”

Lord Duncan, UK Government Minister said: “As the report shows, the OGTC has had a successful first year, and is poised to continue its innovative work in the oil and gas sector. It is an example of what can be achieved through joint working between Scotland’s two governments, and partners through City Region Deals and I look forward to seeing what it achieves over the coming years.”

Paul Wheelhouse, Scottish Government Minister for Business, Innovation and Energy said: “The Oil & Gas Technology Centre has had a hugely successful first year and innovation is absolutely key to a sustainable future for our oil and gas industry and to enable our supply chain to continue to win new business. That’s why the Scottish Government has committed £90 million over ten years to help create a more positive environment for investment in the North East of Scotland.”

Jenny Laing, Co-Leader of Aberdeen City Council said: “We congratulate the Oil & Gas Technology Centre team on the achievements of the past year and the Council is proud to be a partner. The Technology Centre is an excellent example of a concept which was very swiftly brought to fruition and I’ve been impressed by the progress made in a short period of time.

Jim Gifford, Chair of the Aberdeen City Regional Deal Committee said: “The Centre has out-performed even the most ambitious expectations that any of us had when the business case was first approved. Getting it off the ground, as well as going on to exceed their targets in the first year alone is a great achievement. I wish them every success for the years to come.”

Sir Ian Wood GBE, Chairman of Opportunity North East said: “ONE is proud of the role we played in the formation of OGTC and are very impressed with the speed at which it is clearly making a significant impact. We believe the OGTC will clearly play a pivotal role in maximising the remaining North Sea oil and gas opportunity, looking at diversified energy opportunities, while stimulating local economic and employment opportunities for our region.”